The kudu is one of the most spectacular must-see animals for African safari lovers. It has been described as one of the most handsome of the antelope family, due to the male’s unique large, corkscrew horns.

The name found its way into the English language courtesy of the Afrikaans of South Africa. The Afrikaans term ‘koedoe’ is a combination of both of zebra and deer. 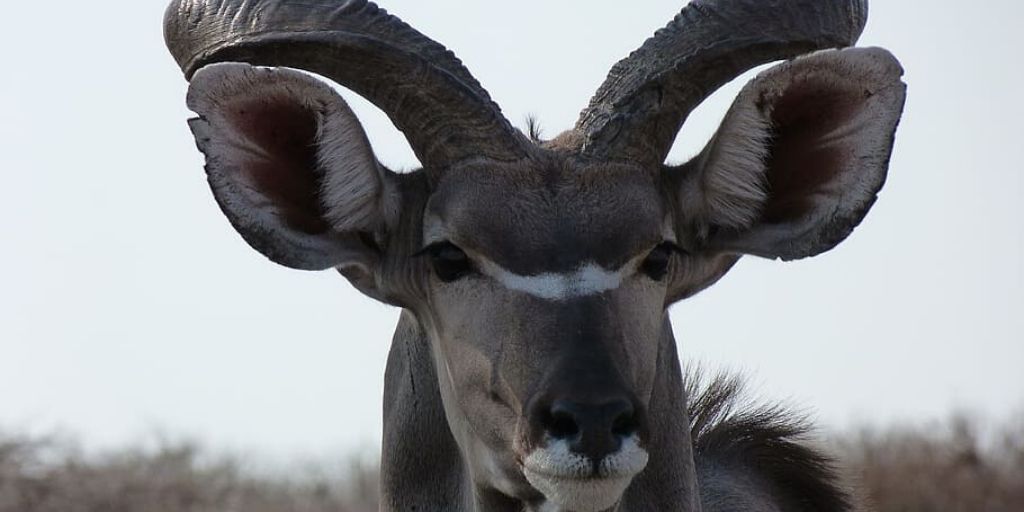 Kudus are majestic in their looks, with their twisted horns making them quite distinct from other antelopes. Horns are the main trademark of the kudu. While female kudus has short horns, males have horns of up to 1.8 meters, the longest of any antelope, which take an average of six years to reach their full length.

Of the two kudu species, the greater kudu has a larger body size. With a height range of between 1.3 and 1.5 meters, the greater kudu males stand as the tallest antelope after the eland. On weight, males tips the scales at a minimum of 257 kgs and 315 kgs. The females are smaller and shorter, with an average height and weight of 1.2 meters and 170 kgs respectively.

Skin coloration ranges from reddish-brown to blue-gray, interspersed with white markings. Other markings include the distinct 6-10 vertical stripes on the rib side, nose chevrons, and white forelegs for the greater kudus.

Lesser kudus are lighter in weight and have a shorter stature, at 92-108kgs and 100cms respectively. While the females will spot a bright rufous coat the males have a darker slate gray skin. Unlike greater kudu, they have shorter horns more white stripes (11-15) on its rib side and black and white leg colorations.

Greater Kudus are widely distributed in Southern Africa especially in the bushveld lowlands. Other regions include East African regions of Kenya such as in the Tsavo National Park, Tanzania’s Serengeti National Park, and the horn Africa region of Ethiopia and Somalia.

Outside of Africa’s national parks, kudus have receded to mountainous woodlands due to human activities in their preferred lowlands. However, it is not rare to find them in close proximity to human settlement areas, due to their stealth and nocturnal adaptations.

They live in herds of approximately 25 antelopes but it is also possible to find herds of two to three females with their calves. While their natural habitat has faced threat from human activities the world conservation body the IUCN highlights the greater kudu as “least concern” with their population considered stable. The lesser kudu is highlighted as “near threatened” with their populations in decline. (See more on Africa’s endangered animals.)

Kudus are primarily browsers, preferring leaves and shoots from trees and shrubs, and flowers and fallen fruits. Although their stomach structure is made for browsing, during the wet season they occasionally supplement this diet by grazing the lush grasses.

Greater kudus are well adapted to surviving during the dry season by feeding on wild watermelons for water. Unlike the greater kudu, the lesser kudu does not depend so much on the water for their survival and get can get most of their water requirements from the parts of succulent wild fruits, only taking water if available. 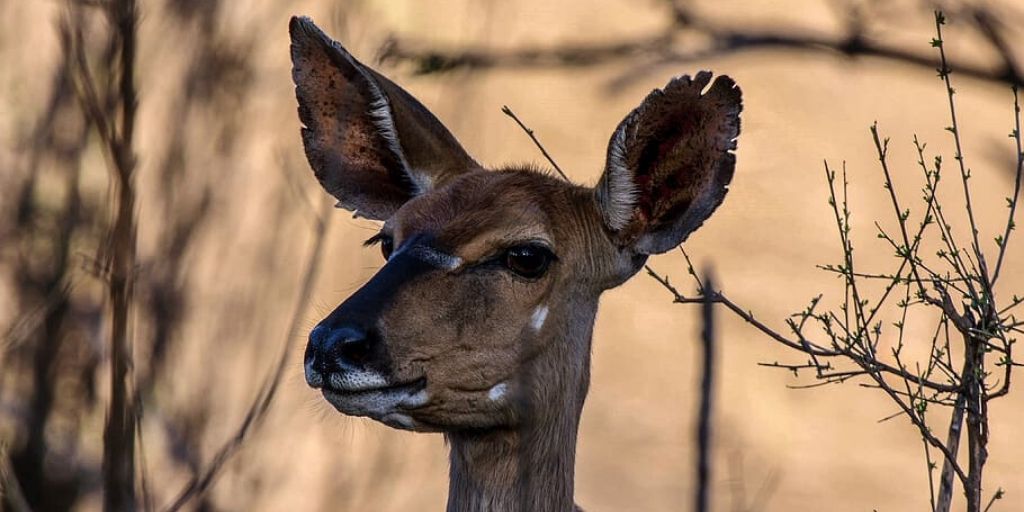 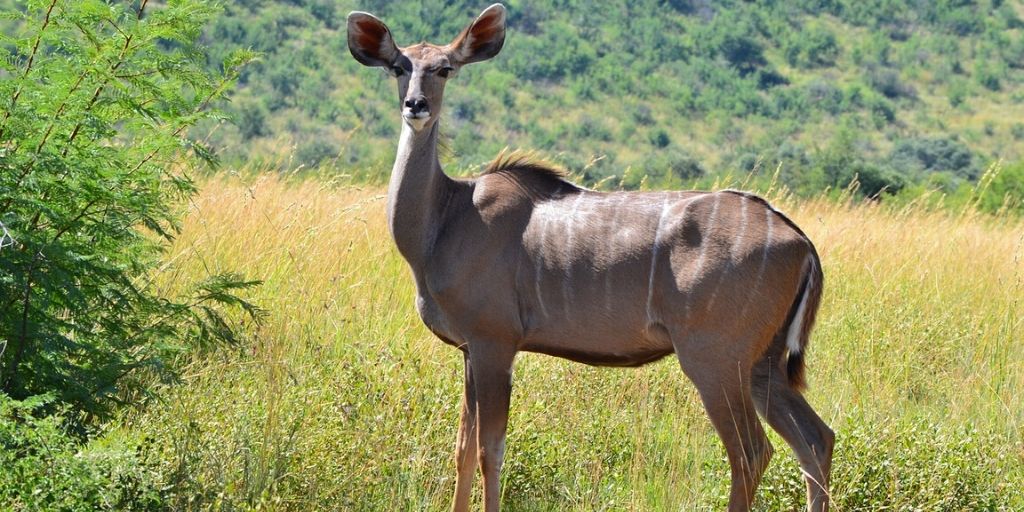 Kudus don’t roam over long distances but rather live in home ranges of up to 6 km sq. They are active primarily from dusk until dawn, tending to rest during the daylight hours in woodlands where their camouflage helps them to avoid predators.

Sexual segregation is prevalent with males and females only meeting during the mating season, which usually coincides with rainy season. Some form of courting behavior precedes mating, after which the pregnant female undergoes a seclusion period before giving birth.

Newborn kudus are hidden to avoid predation for their first five weeks, during which the mother frequently returns to nurse the calf. After this period the calf will follow the mother, and from six months is old enough to fend for itself.

By the age of 1,5 years, most male calves start showing signs of gender. At his point, they leave their mother and join a group of up to ten bachelor males.

Yousouf
1.0 out of 5 stars Can not handle the taste and smell

Verified Purchase
I was warned from feedback of others not to place an order on this site,but i never listened,cuz i belief i might have greater chances of receiving my goods as compared to others.And eventually i was disappointed too,not only was the arrival delayed,but the product came all damaged.So i wnt order again

Reviewed in the United States on February 5, 2013

Verified Purchase
I got this because of a friend who recommended me dis site.
Also the price is very very high for this product but my  mentions something, that “this site is very reliable,and its deliveries are always done in time,as well as their goods always authentic.”
It is wolly mammoth ivroy I ordered and that’s what I got.I am so happy for my package,thanks i received it 3 days ago as expected,and my product arrive in perfectly good shape.
Cheers!
Helpful

Verified Purchase
bought in this brand because of friends  recommendation. it’s ok: definitely authentic and original ivries.But arrived all broken,had to figure out a way to use it so my money does not go to waste,since i only wanted to decorate my house with it as a historical archives.I have really never had luck on online shoppings anyways.Guys Hope my next command will come undamaged!! Thanks for the delivery.

Reviewed in the United States on October 4, 2019

Verified Purchase
Not my thing and took us a while to use,cuz it came damaged,though the delivery time was respected.But i will not buy again
Helpful

Sixtus
1.0 out of 5 stars Definite Mess!

Verified Purchase
We were really disappointed with this product. We ordered this brand instead of our usual since it was available in tplexport.com, but this one failed us since it came all broken,and there was delayance in delivery too for over 2weeks.I will not buy again.

Reviewed in the United States on December 31, 2012

Verified Purchase
This is the first time trying this brand. I recommend it to everyone.Arrival time for delivery was respected,authentic,bt product did not come in good shape though.As well as quantity too small for that price.

J. Dennis
5.0 out of 5 stars Helped make an authentic necklace..

Verified Purchase
I enjoy the packaging,very attractive and elegant. Arrived in time and exactly as described.I had the opportunity to get this site from a good friend of mine.My fabrics came out excellently well and i successfully sold to my customers the necklace i made from it and made enough profits from that.You are awesomely the best tplexport.com. Good product, good supplier.I recommend you a 100{98880d97af0555a3a517c8aae666eeb64e7bd6d49cbbe05617dcb138f6e48200}.

1.0 out of 5 stars wolly mammoth ivroy

Reviewed in the United States on February 13, 2013

Verified Purchase
I was so sceptical to order here,and it turns my intuition was right,the product came already broken,as well as delayed so much and is of no use to me,since its all damaged.wnt buy again from this brand.

Verified Purchase
This site is not that reliable as i expected,the delivery was delayed for two weeks,the goods arrived damaged too.wnt recommend

5.0 out of 5 stars distinctive colours and scent

Verified Purchase
Am very happy with this product quality/price. And the product is perfectly authentic.Thanks God some reviewers made mention of this site,that’s how i get to know where to order for mine.The services here are very reliable and always answerable to their customers questions and worries. Thanks for the quick delivery.

Be the first to review “Kudu Horns For Sale” Cancel reply

Zulu
Brought to you by WisdmLabs: Expert WooCommerce Developer